There has been an increase in the quantum of knowledge and science. It has controlled the need of physical labor in the life of man.

There has been an increase in the quantum of knowledge and science. It has controlled the need of physical labor in the life of man. But it has opened the door to the acquisition of the terrible firepower of man. Even today, when one country develops and tests a new war weapon, the other immediately moves towards creating a more deadly ‘answer’ than that. This competition is not stopping.

In the last one month, the attention of the whole world has turned towards Afghanistan. Topics like war, violence, victory, defeat, terrorism, bigotry, deceit, mistrust, exodus, women are being repeated time and again in important discussions. The common sense is that millions of people are in dire straits and hardships, and global society is finding itself unable to practically stand up to them.

All knowledge-science, intelligence-discretion, resource-resources and civilization-culture have been left on one side and on the other hand the people born in the medieval mentality seem to be overwhelming everyone. At the time of the establishment of UNESCO on 16 November 1945, all the countries of the world had accepted that wars are born in the human mind and efforts should be made to structure peace there. But till date neither the war stopped, nor the violence stopped, nor did there be a positive change in the attitude of man. In such a situation, on this occasion, a special responsibility of the enlightened class of India becomes because we all keep proudly remembering the brotherhood, peace, non-possession and universal brotherhood inherent in Indian culture.

Like every year, this time also Gandhiji will be remembered on 2nd October. Just three weeks before this, on September 11, Swami Vivekananda was remembered. On this day in 1893, he answered his welcome at the World Assembly of Religions held in Chicago, America, with the words that became an immortal heritage of history: ‘American brothers and sisters’! It has preserved in itself that formula of world peace and brotherhood, which is the only basis for the survival of man and humanity on earth.

If the living beings of the human species do not recognize the eternal unity of man in practical form, then their destruction is certain. The first words that Swamiji said in America after this were his heartfelt words: ‘Communalism, dogma and his dastardly lineage bigotry have ruled this beautiful earth for a long time. They have been filling the earth with violence, repeatedly showering it with the blood of humanity, destroying civilizations and plunging countries into despair. If it was not for this horrific demon, then human society would have become much more advanced today.’

After 1893, the world appreciated man’s new achievements in knowledge-science and their use in human interest, on the other hand he also saw the inability of human society to flourish the trilogy of communalism, dogma and bigotry. Couldn’t stop blooming. Even two world wars could not stop the human race from continuously moving towards destruction. Efforts were made, the United Nations was formed, but many wars continued after that and are happening even today. It is known to all that many organizations and governments encourage violence, but the human race is not getting its bite.

At this time, the scenario of Afghanistan is spinning in everyone’s mind. The citizens, women, children there are facing heart-wrenching inhuman conditions. This country has been facing the tragedy of communalism, bigotry and bigotry for decades. There is no chance that human society will intervene and make effective efforts to secure basic human rights to Afghan citizens. If one tries, immediately the other will oppose it. There have been many occasions in the past decades when the existence of institutions such as the United Nations and its Human Rights Commission has become meaningless in its present form.

The question that may shake every thinking person is that knowing everything, what are the motivations that do not allow man to be separated from violence and war. No one will be found to give ‘official’ support to communalism, bigotry and bigotry, but people immersed in this are engaged in their self-fulfillment by presenting their own analysis. It is not that the human race lacks the understanding or ability to set the right path for itself, or to lead a gentle, meaningful and satisfying life by following it. The sages like Gandhi, Martin Luther King, Nelson Mandela and even those in power have been considered as examples of this aspect. Many scholars have tried to understand this paradox from time to time and will continue to do so.

Gandhiji had conceptualized Ram Rajya. Village Swaraj was his dream, which those who came to power by taking his name never tried to understand it. For this reason, the burden of administration is increasing continuously on the person standing in the last row. In many areas of Rajasthan, the saying can be heard that God save every person from black coat (lawyer), brown coat (police) and white coat (doctor)! How beautifully it presents the basic instincts of man. When the systems built for the benefit of the common man concentrate all the power and the right to make decisions, then the morality of the decision-makers (with the exception of exceptions) is inevitable and the beginning of violence starts erupting from here.

There has been an increase in the quantum of knowledge science. It has controlled the need of physical labor in the life of man. But it has opened the door to the acquisition of the terrible firepower of man. Even today, when one country develops and tests a new war weapon, the other immediately moves towards creating a more deadly ‘answer’. This competition is not stopping. For the past six decades, I have been reading about efforts to ban nuclear weapons.

Disarmament did not happen, but today so many weapons have increased in the world which can destroy the earth not once but many times. Swami Vivekananda’s words in Chicago reflect the anguish he had seen while traveling in India in the form of injustice and exploitation by some of the human race on others. Five decades after the Chicago conference, the great scientist Albert Einstein was also deeply troubled by the inhuman treatment done by humans on countless human beings.

The atomic bomb was invented and tested in 945. The apprehensions about its potential and misuse were being discussed in the intelligentsia everywhere. In his own view, the sensitive human behavior of man towards man should have been considered as a sign of progress. He wrote that ‘an understanding of the use of nuclear power by man will not create new problems. That information has led to an urgent need for a solution to a problem. The new invention has had a quantitative effect, not a qualitative one! As long as there are sovereign, all-powerful nations, war is inevitable. When or when this will happen, it cannot be said, but it will definitely happen.’ This was true even before the invention of the atom bomb, it will remain so in future also. Only the destructive power of war will increase. Today we are all seeing it, experiencing it. Its solution will be possible only when man will be able to recognize the power of spirituality.

Varun Chakraborty wreaked havoc on Bangalore batsmen, KKR got the target of so many runs People said – Modi, Yogi’s fan but will not vote for BJP MLA 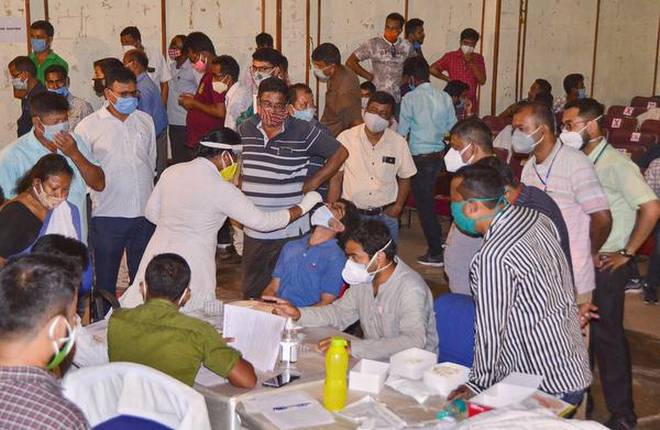