The Buenos Aires legislator had a central role in defining the province’s lists that Cristina’s son agreed upon; fights to position itself in a crucial electoral district and manages the official bloc in the provincial Chamber of Deputies

The role of Facundo Tignanelli as one of Máximo Kirchner’s central negotiators in the making of lists is a fact in which both leaders linked to the Peronist mayors and the Renovador Front coincide, and which they confirm from within La Cámpora . Provincial deputy in Buenos Aires since 2017, president of the Frente de Todos bloc in the Legislature and ninth on the list of candidates to renew his seat for the third electoral section, Tignanelli acquired a significance that clashes with his daily low profile, from which grew in the consideration of the head of La Cámpora as he seeks to position himself as an alternative in his district, La Matanza, where the Peronist governs Fernando Espinoza .

The definitions of lists in the province of Buenos Aires showed Máximo Kirchner as the owner of the pen and negotiator with the different tribes that nest in the ruling party. In this game, the head of the ruling bloc in the Lower House had a few delegates, such as Gerónimo Ustarroz (counselor of the Magistracy, one of the PJ’s proxies and foster brother of the Minister of the Interior, Eduardo “Wado” de Pedro ) and Santiago Révora (Buenos Aires Undersecretary of Municipal Affairs and De Pedro’s cousin).

The group of candidate negotiators also includes Tignanelli, whom in La Cámpora they worry about pointing out as a leader who exceeds the figure of a mere delegate because he has “his own political imprint and territorial deployment”, according to sources from the organization to PNC. “Máximo does not need delegates in the province. He speaks himself with everyone, from mayors to the last councilor ”, they affirm in the group.

Tignanelli advanced in the consideration of the head of La Cámpora, with a promotion in recent years that a camper source from the province of Buenos Aires confirms: “It is a late link.” According to Tignanelli himself in an old interview that can still be read on the La Cámpora website, he began to attend the organization’s meetings in 2008. The Buenos Aires deputy was born in 1987 and has a civil servant brother, Juan Manuel Tignanelli , who is General Director of Centralized Benefits of Anses, the body chaired by Fernanda Raverta , another of the main faces of La Cámpora.

As LA NACION learned , one of the leaders with whom he was active for many years is the current Minister of Development of the Buenos Aires Community, Andrés Larroque , Secretary General of La Cámpora. “Now they have separate responsibilities,” clarified a camper source.

“He is one of the main swords of Máximo Kirchner in the province, a player of the entire field. He presides over a block of more than 40 deputies, who are not easy to lower and he takes it without problems. With him the lists were defined ”, describes a Buenos Aires legislator who knows Tignanelli well. “It has a low profile. Always with sneakers, a jean and a black T-shirt ”, he adds.

Tignanelli is also a member of the Buenos Aires Magistracy Council, as one of the three titular representatives of the provincial Chamber of Deputies in that body. It shares that place with the deputies Jorge D’Onofrio (Front of All) and Sandra Paris (Together for Change).

A mayor of the suburbs with several battles on the back considers him “a delegate, a shipowner of Máximo Kirchner.” And he adds that he is “extremely trusted” by the head of La Cámpora, but that “he has no electoral weight.”

The territorial base of Tignanelli is in La Matanza, where the definitions of lists left consequences between the municipal government and La Cámpora. With the closing consummated and without places on the payroll of Mayor Espinoza for the organization, Amira Curi , a leader close to Tignanelli who was municipal undersecretary of Human Rights , resigned from the local cabinet . After the resignation, she assumed as delegate of the Buenos Aires Ombudsman’s Office, which will open a headquarters in the district. Curi integrates the list of Máximo Kirchner in the Buenos Aires PJ, as counselor for the youth branch.

Peronism has a single complete official list in La Matanza, headed by Espinoza as a candidate for councilor. The Frente de Todos derecognized four payrolls seeking to compete and achieve possibly some legal authorization to present himself as “short lists” without being attached to the sectional and provincial sections.

“La Cámpora is on the warpath,” defines a man from Matanzas Peronism who was injured in the closing of lists. Another justicialista source indicates that Espinoza does not go to Tignanelli. “Fernando always went to Máximo. Tignanelli receives instructions, but Fernando looks for the one who gives them ”, says the source.

The construction of Tignanelli and La Cámpora in La Matanza is laborious, according to what they tell the nation from justicialist terminals far from the camping in that district. “They are trying to push, but they would have to win the representation of traditional Peronist groups. La Matanza is the most institutional place of Peronism ”, they indicate to this newspaper in one of those aspects. “It is very difficult to have a journey in our district, they are more than 320 square kilometers,” they point out from another sector of the local justicialismo.

Gerd Müller, the “Bomber of the Nation” who made Germany happy, died 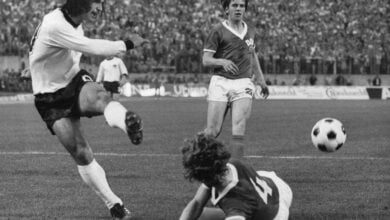 Gerd Müller, the “Bomber of the Nation” who made Germany happy, died Lewandowski and Bayern knock out Bochum Ella Leyers: “Dennis Black Magic once called me from prison… For a role”